Initially, there was no village or settlement named Tofino. Nuu-chah-nulth First Nations were the first inhabitants of Clayoquot Sound. The Tla-o-qui-at Village of Opitsaht was located across the water from Tofino on Meares Island. They are known to have inhabited this area for thousands of years. The word “Clayoquot” comes from their native word “Tla-o-qui-at”, meaning different people or people of Clayoqua. Tofino and specific places along that inlet would have had numerous Tla-o-qui-at names. The Nuu-chah-nulth were fishers of salmon, cod, halibut and shellfish. They also hunted sea lions, seals and whales. It is thought that prior to Europeans arriving on their shores their population reached 100,000. In 1995, the population of Nuu-chah-nulth First Nations inhabiting Tla-o-qui-at Reserves (English term is Clayoquot Reserves) was 618. 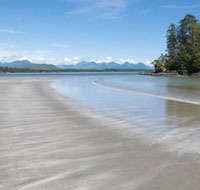 In 1774, Captain Juan Pérez reached the Queen Charlotte Islands by authority from the viceroy of New Spain. The purpose was to reinforce Spain’s claim on the west coast of North America. This region was just north of Clayoquot Sound and 40km north of Tofino, between Estevan Point and the Escalante River. Curiously, Captain Pérez and his crew never came ashore. Captain James Cook arrived 4 years later at Nootka Island in the spring of 1778. Captain Cook came to claim the area for Britain, but that wasn’t received well with the Spaniards. In order to avert war, various agreements were written in the three Nootka Conventions signed between 1790 and 1794.

It was in 1792, that Clayoquot Sound’s southernmost inlet was named “Tofiño Inlet” by Spanish navy commanders Dionisio Alcalá Galiano and Cayetano Valdés. It was named in honor of Captain Vincent Tofiño. Captain Tofiño taught navy commander Galiano cartography. Just one year prior, this inlet was named “Gervete” by Galiano and Cayetano Valdés Spanish compatriot, Juan Pantoja. He was the first pilot on the San Carlos. The names of these three Spanish navy men continue to be recognized and used today in British Colombia. Galiano Island, Valdés Island in the Strait of Georgia, and Pantoja Island in the “Spanish Pilot Group” of islands. These are located southwest of Bligh Island in Nootka Sound. The reason why Europeans had such a great interest in this area was because of furs from, primarily, the sea otters. There was a plentiful supply. There was great demand from Asian countries.

The first non-native settlement was established in 1855 at Clayoquot on Clayoquot (or Stubbs) Island. To create a greater distinction between the township of Clayoquot and Clayoquot Island the name “Tofino” began to be used. Vincente Tofiño was a Spanish navy rear admiral. He was a renowned astronomer, mathematician, and later, the King’s hydrographer. Vincente Tofiño charted the ports and coasts of Spain and the shore of North Africa between 1783-1788. He was later elected as correspondent of the Spanish Academy of History and of the French and Portuguese Academies of Sciences. 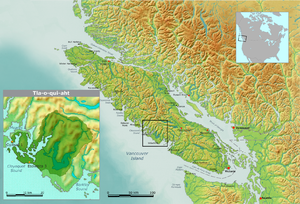 By the late 1890’s, homesteads began appearing on the Esowista Peninsula, across the water from Clayoquot. Settlers were mostly Norwegian, Scots and English. The first doctor arrived in 1905. The first post office was founded in Tofino, February 1st, 1909 and its’ first church was built in 1913. The Church of England funded the project instructing that the church be built on the most beautiful spot on Vancouver Island. The church still stands today. Tofino was originally identified in the British Columbia Gazetteer as a “Post Office and Steamer Landing”, but on February 5, 1932 it was incorporated as a village municipality.

Tofino continued to expand with the first logging road opening in 1959. This was the most significant transportation link which allowed new markets to flourish for fish and logging. This road stretches through the mountains between Port Alberni and the coast. Next, the Pacific Rim National Park was established in 1971 thanks to Dr. Howard McDiarmid. The national park opened the door for international tourism to Tofino. The most recent major international recognition was by the United Nations (UN) as a UNESCO Biosphere Reservein in January 2000. The UN recognized this area as one of unparalleled natural and cultural riches that has remained largely unchanged.

Following World War II, the Dominion Government decided it would be wise to build an air base on the West Coast. Tofino was chosen as the perfect location. It now serves as Tofino and Ucluelet’s airport.

Much more can be found online to enhance your understanding of Canada’s Pacific Rim! Put it on your calendar to come visit and experience the beauty and rich culture first-hand.